Among the memorable moments of my field trip in Egypt was attending a participatory theatrical play on the issue of female genital mutilation in Fall 2014. The play was among a number of grassroots initiatives launched to celebrate the International Day for the Elimination of Violence against Women. The initiative is part of a growing wave of women’s activism that emerged following the 2011 uprising. The show narrated the life and daily struggles of Hania, a young middle class Egyptian girl as she confronted harassment and gender discrimination at school and home. The story reached its climax as Hania’s parents decided to circumcise her. The play closed with Hania’s emotional cry as she is pushed to the floor, strangled by her mother and the midwife approaching her with a knife.

“And everything froze,” I wrote in my field notebook, “the silence seemed so loud in the crowded room where over 200 people were watching the play”. The heavy silence continued as the director took the stage asking for the audience’s reactions as well as what they thought Hania should do. 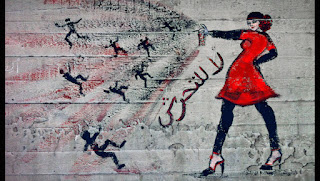 The first to speak was a middle age Sheik. Speaking in a confident voice, he insisted that female genital circumcision is a religious obligation rooted in Islam and dictated in its teachings. Before he could finish his sentence, the majority of the women in the room raised their voices in dismay, shouting that the practice was inhumane. Some women even outright challenged the Sheik’s religious view, insisting that female circumcision is rooted in systems of discrimination, oppression and patriarchy.


Following the women’s assertive reaction to the Sheik’s statements, I left with a sense that change and social transformation are indeed possible, and that they can take place when and where we least expect. For many observers the mixed gender outcomes following the Egyptian uprising are signs that the grand visions of the uprising are gone. More dramatically, that disappointment marks gender dynamics and politics in Egypt.

Disappointment emerges as people compare the expectations of the revolution to the post-revolutionary realities. The politics of disappointment, I believe—in line with social movement theorists—is a complex political and affective form in its own right (Greenberg 2014: 11; Gould 2009; Tarrow 1998: 169). In the case of Egypt, notwithstanding the overall disappointment in the political process and the sense of dismay or even perhaps futility, women continue to find ways to advance their rights and agenda in innovative and novel ways.

While women’s rights groups in Egypt continue to fight for formal representation in political institutions and legal rights in the constitution, they are increasingly focusing on bringing to light issues of gender inequality within and across Egyptian society. The invisibility of women in the formal political landscape is evident in their weak representation in parliament, government and political parties in the post-uprising period—whether under the Supreme Council of the Armed Forces (SCAF) rule, the Muslim Brotherhood, or under the current regime.

Women’s rights groups are also slowly moving away from the top down approach that they have often adopted during the last decade, particularly under former president Hosni Mubarak’s regime. The younger generation of women’s rights activists that has emerged following the 2011 uprising emphasizes rooted and localized activism that takes shape in non-conventional initiatives.

Under these emerging forums of activism, gender issues figure squarely and centrally. Salient among these initiatives are anti-sexual harassment campaigns, women’s oral history projects, as well as visual and literal arts productions. Beyond the creative and localized approach of these initiatives, these forms of activism and engagement hold great potential as they are often, but not always, tolerated by the regime. They potentially may escape all together the radar of state censorship and security surveillance. In an increasingly narrow political space these venues thus hold potential for sustaining engagement, overcoming disappointment and pushing for social change. Furthermore, these initiatives are significant in raising consciousness about gender inequality and women’s rights among women as well as the broader Egyptian society.

Awareness of one’s own interests both precedes and enables democratic representation to take place, Jessica Greenberg argues in After the Revolution (2014). Indeed, carving a space outside of politics for grassroots activism and social empowerment recuperates a potentially democratic project in a closed off and politically sensitive context.

The ostensibly benign political nature of these mundane forms of activism is a response to, and a path out of, more intimate encounters with violence, as well as the kinds of political and social dilemmas that the history and the present of Egypt’s contentious politics pose. Members of these artistic initiatives are also somehow viewed above the fray of messy political and ideological life, and thus might be better able to represent the interest of women and introduce social change.

A focus on these forms of activism is significant as it complicates our understanding of activism in the context of a politics of disappointment. It encourages a view of activism not only in multiple sites but also at multiple scales of action and meaning.

Dr. Nermin Allam holds a Social Science and Humanities Research Council Post-doctoral fellowship at Princeton University. She completed her PhD in International Relations at the University of Alberta.

Photo Caption:
Photo shows graffiti of a woman with the words “no harassment” in Arabic, taken on June 23, 2012. (AP Photo/Maya Alleruzzo)
Posted by AlbertaPoliBlog at 10:10