The past decade has seen a growing body of research that focuses on various aspects of Indigenous peoples’ politics. However, few studies openly engage with Indigenous feminism(s). Although important, these contributions turn away from the everyday realities confronting Indigenous women including violence, exclusion and unequal access to resources and, instead, emphasize forms of political actions directed at larger systems of domination.

Indigenous feminist scholars note that colonialism was and continues to be a gendered process, which has had powerful yet distinctive effects on Indigenous men, women and LGTBQ people. These scholars argue that gendered, sexualized violence, discrimination, and unequal access to natural and material resources are relationally produced and naturalized through social, legal and political processes. They also question the tendency to uncritically emphasize the needs and aspirations of a homogeneous collectivity as it reproduces the naturalization of violence against Indigenous women and LGTBQ2-S individuals. Indigenous feminism simultaneously aligns with and often contests Indigenous self-determination and Indigenous women’s activism embedded in this paradox. 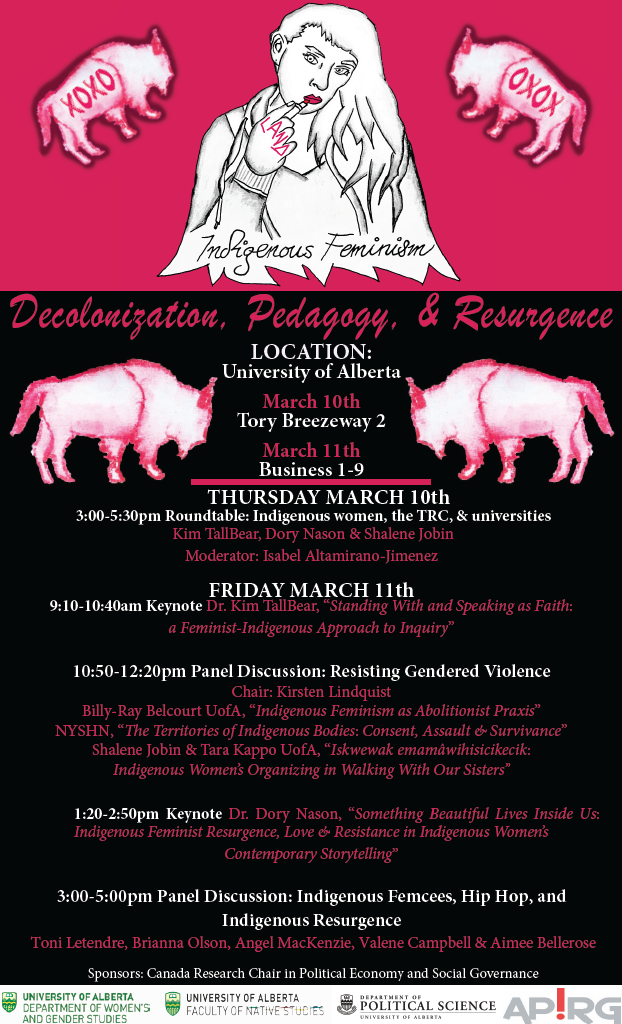 When Indigenous women lead political initiatives that bring their communities into the national spotlight, such initiatives are appropriated by other community members in the name of the community. Take for example Indigenous women’s activism regarding gendered violence. Indigenous women have been mobilizing for decades to struggle against violence and its invisibility. When support for a national inquiry on missing and murdered women and girls (MMIWG) started to coalesce, different voices started to demand the inclusion of missing and murdered Indigenous men. While nobody denies the importance of investigating crimes against Indigenous men, Indigenous women activists are expressing concerns that this inclusion would erase, once again, the gendered nature of widespread violence against Indigenous people.

At the same time, frameworks appealing to the intervention of the colonial state reinforce narratives of the Indigenous female victim subject as one who needs to be protected by the state. This narrative conceals the implication of the state in creating the conditions for such violence to exist. Indigenous women are overrepresented in the prison system, and they are more likely to face racialized violence and criminalization; however, these violent expressions of state regulation are naturalized. The distinctive dynamics of the current neoliberal regime plays out in ways that exacerbate this naturalization by emphasizing genderless individuals who experience trauma and violence resulting from their own failures. When these narratives racialize people, violence is cast as an outcome of their own cultures. The transformation of the colonial into the neoliberal state in which recognition, rights, apologies, and abandonment coexist have worked to produce ambiguous zones of legality/illegality among and within communities. Indigenous women’s bodies have become trapped in these ambiguous zones and are simultaneously disposable and indispensable elements of the neoliberal state.

Centering the voices of Indigenous women and girls not only contributes to unsettling representations of the state-as-savior but also draws attention to the responsibility of communities in addressing systemic gendered violence and its different manifestations.
Indigenous feminism contributes to these urgent goals. However, and perhaps surprisingly, Indigenous feminism continues to be controversial. The term and its relation to specific fields of thought remains complicated and this, in part, flows from Eurocentric colonial histories and normative conceptions of being a woman. The very singular way in which women’s activism has been understood has produced hierarchies that erase the history of Indigenous women resisting both colonialism and patriarchy. Despite these hierarchies and erasures, Indigenous feminism remains central to projects of decolonization.

Indigenous feminism(s) insists on the need to gender our analysis in the struggles for self-determination and decolonization. Being indigenous and woman is interconnected with everyday lived experiences, land, and worldviews as well as shaped by broader social power relations within and outside our communities. Thus, self-determining practices cannot be separated from our bodies and the ways in which we relate to each other in our everyday lives.

Dr. Isabel Altamirano-Jiménez is Binizá or Zapotec from the Tehuantepec Isthmus in Mexico. She holds a joint appointment as Associate Professor in the Department of Political Science and the Faculty of Native Studies at the University of Alberta. She is the author of Indigenous Encounters with Neo-liberalism: Place, Women and the Environment in Canada and Mexico (2013) and Co-Editor (with Nathalie Kermoal) of Knowing the Land, Speaking the Land: Indigenous Women’s Knowledge and Territory (2016).
Posted by AlbertaPoliBlog at 10:38