Nearly two decades after the Good Friday Agreement was signed in Belfast on 10 April 1998, the past is still omnipresent in Northern Ireland.

This Easter weekend, nationalist communities in the North and many in the Republic of Ireland will commemorate the centenary of the Easter Rising – the failed insurrection that provided the latent catalyst for both independence and partition. The Good Friday Agreement will have no parade for its eighteenth birthday: it is easier, somehow, to remember violence (“theirs” and “ours”) than to celebrate the painful compromises of an incomplete peace.

It has been called a “permanent ceasefire”, and a “peace without reconciliation”; the paradoxically named “peace walls” divide more communities today than at the height of the Troubles, and political attitudes remain polarized.


In post-conflict societies, memory is like a ghost that lingers – neither fully tangible nor fully absent. Rather than strict recall, collective memory of the past is a construction, somewhere between recollection, history, and myth. And, like the neighbourhood estates still bifurcated by razor wire, memory too remains divided and divisive.


In Northern Ireland, it often seems as though there are two versions of memory: “ours”, which is “true” and “theirs” which is “not”. These monolithic narratives of the past are inextricably tied to ethno-political identity, and allow little space for alternative approaches to the past to emerge. Gender, in particular, is an axis of identity that is still obscured by, or subsumed within, the ethnopolitics of the past. As Sara McDowell attests in her 2008 work, “Commemorating dead ‘men’: Gendering the past and present in post-conflict Northern Ireland,” on republican memorial spaces,

Commemorative landscapes, particularly those which evoke the memory of war, are among the most gendered, as they largely document (and subsequently reproduce) the experiences and narratives of men, [...] and often elide or complicate the interpretations of women (337).

The history of the conflict – the Troubles specifically and the tensions between British and Irish identities generally – has been constructed as male by default: it is a militarized history of armed rebellion, struggle, or all-out war, with men at the centre. Not only does this version of historical memory neglect to recognize the contributions of women to the conflict and overlook other significant events to which women played a pivotal role, at the same time it serves to legitimize the power relations of the present – one as militarized and male-dominated as the past.

But some are daring to remember the conflict, and Northern Ireland’s long, difficult history, otherwise. How does remembering gender – and gendering remembrance – challenge and deconstruct the entrenched versions of the Troubled past? 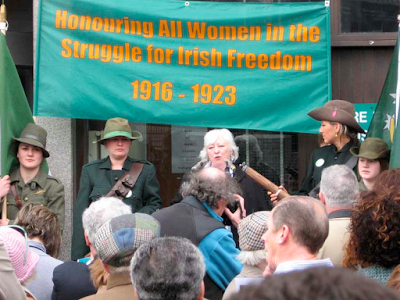 Part of this approach is to expose the near absence of women and their experiences from commemorative discourses and landscapes. A stark example is that of Jean McConville, who was “disappeared” by the Provisional IRA in 1972. A widowed mother of 10, McConville was abducted at gunpoint in front of her children and driven across the Irish border, where she was “executed” as an alleged informer. While her case has been high profile, particularly since the discovery of her remains in 2003, her story has been framed in relation to the legal and political implications for high-ranking members of Sinn Fein – namely, the party’s leader Gerry Adams.

Outside of family vigils, there has been no effort to officially commemorate her death. While McConville’s case has been politically mobilised, she herself is often portrayed solely as a widowed mother of ten. Yet in a world of clearly drawn lines, she transgressed many boundaries: McConville was raised a Protestant but converted to Catholicism upon her marriage; she was known for helping her neighbours regardless of their background – and the allegations of “informing” came after an incident in which she offered aid to a wounded British soldier outside her flat. By acknowledging the complexities of Jean McConville as a person and as a woman, her role in the history of the Troubles can become much more than a helpless victim.

The second strategy is to challenge the co-option of women’s experiences into stereotypical roles and symbols – either as saintly mothers, innocent victims, or militant soldiers for the cause. To do so is to reclaim the complexity of women’s experiences of the conflict, and to acknowledge the ambiguity of multivalent identities beyond Irish nationalist or republican versus British Loyalist or unionist. It also means permitting men and boys to reconceptualise their histories beyond these confines.

The commemoration of Provisional IRA volunteer Mairead Farrell is doubly complicated: her role as leader of the Armagh women's no-wash protest and hunger strike (1980) is subordinated to her martyr's death in Gibraltar (a seemingly easier martyrdom with few of the ambiguities of self-starvation: this death allows for a clear distinction to be drawn between the 'legitimate' IRA mission and the illegal actions of SAS). The scripting of her remembrance was further complicated by attempts in 2008 to commemorate her death on Stormont grounds – to celebrate International Women's Day. This rewriting of Farrell as a feminist republican icon obscures the ambivalence between the two terms – feminist and republican – that remains lodged within republican politics; and erases the role prominent republican figures (including Adams) played in subordinating the Armagh women's strike in favour of the Maze protests.

From the unionist perspective, as a 'terrorist', Farrell could not (and presumably could never) be remembered in a democratic setting, (even and especially) under the auspices of 'peace'. In a further escalation of commemorative politics as 'war by other means', Jeffrey Donaldson of the Democratic Unionist Party (DUP) proposed a counter-commemoration – of the Special Air Services (SAS) unit that had carried out the Gibraltar killings. Thus the attempt to 'celebrate' Farrell's memory recreated predictable conflictual responses along republican-unionist lines, even as it exposed significant ambiguities within mainstream republican politics.

Finally, remembering gender means creating space for the marginalized to speak and be heard. Young women in the nationalist community are often incorporated into a version of republican history and identity that is also predicated on the shame, control, and abuse of women. Two examples expose the potential for gender considerations to disrupt and dismantle the discourse upon with the republican past is based. The high-profile cases of sexual violence against Mairia Cahill (elected in 2015 to the Irish Seanad), and Aine Dahlstrom (Gerry Adams’ niece), were repeatedly suppressed and repudiated for decades – not merely to mitigate the legal liability for the criminal acts alleged, but more significantly to protect the image of republican movement. While these two women challenged the accepted narrative of republicanism as the benevolent 'protectors' of the community by exposing their traumatic and abusive treatment within it, that very 'community' worked to contain and rewrite their experiences through denial and deferral in the case of Dahlstrom, and through victim-shaming, in the case of Cahill.

So what would it mean to acknowledge these ghostly silences and absences of gender, long obscured and contained by the dominant discourses of the past? To pry open the cracks and fissures and zero in on the ambiguity and discontinuity they expose therein? What would a post-peace-process Northern Ireland look like if the conflict experienced by Jean McConnville, Mairia Cahill, Aine Dahlstrom, or even Mairead Farrell was commemorated equally, rather than the one reified by the memorialization of paramilitarism? What if history and memory could be viewed from the perspective of those whose positions were complicated, undecided, not able to be neatly packaged? Instead of rewriting the past in support of those who have a vested interest in owning the conflict, let us allow the stories of these women to expose the contradiction, to hold open the pages of history just long enough for their own voices to be acknowledged, and a new story to enter.

Even attempts to “honour” the role of women in conflict can be complicated. 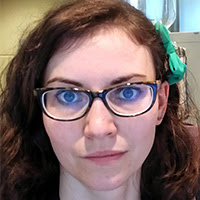 Dr. Rebecca Graff-McRae completed her doctoral studies at Queen’s University Belfast, and a Social Science and Humanities Research Council (SSHRC) post-doctoral fellowship at the University of Alberta. She is the author of Remembering and Forgetting 1916: Commemoration and Conflict in Post-Peace Process Ireland (2010).
Posted by AlbertaPoliBlog at 14:05