On Suruç, Refugees, and Self-Fulfilling Prophesies

In the winter of 2014-2015 I spent some time in the small town of Suruç on the border between Turkey and Syria. I was there as a reporter, covering the story of Kurdish refugees and the siege of Kobane. Except for a few nights spent in a refugee camp with people who became my friends, I lived with other reporters and volunteers in the Amara Cultural Centre, a site that would be damaged by an explosion in a suicide bomber attack a few months after I left. 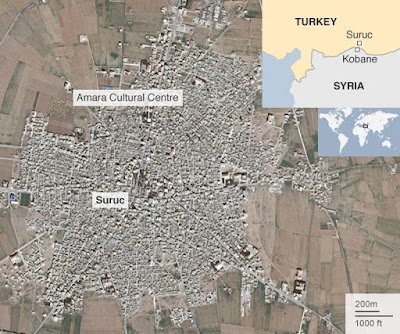 While in Suruç I made friends with many people from all over the world. People were constantly coming to write stories on Kobane, and Suruç offered a more or less safe crossing into Syria. The problem, though, was that crossing the border was only possible if the local governor, a very moody man who liked to blame foreign journalists for writing “Kurdish propaganda”, issued you a permit. Journalists would wait, sometimes for days, for his mood to change and allow a few dozen reporters to cross the border.

After a few days of these shenanigans, I tired of waiting and decided that instead of haunting the governor’s doorway, it made more sense to use my time to meet people from Kobane. This wasn’t difficult, as there were a number of refugee camps around Suruç, and two refugee camps were situated just inside the city.

Looking back, I can say that it was one of the best decisions I have ever made as I met people who challenged and shifted the way I was looking at things. Becoming friends with a few Kurdish women resulted in my befriending a few extended families, learning basic Kurdish words and coming to the camp every day just to see these people again, to talk to them, to ask if the kids were okay. I have never met more hospitable and open people. Though they were living in tents in a foreign country, not knowing when they would be able to return home, they still managed to smile and to find joy in life. 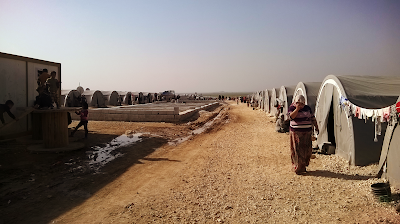 I can remember Halil especially well. A man in his late 30s who lost all his family during the war, he liked to play with kids and to draw. I still have some of his drawings of distant islands and exotic birds in my old notebook.

Remembering his smile, drawings, and expressive gestures, it was very difficult for me to believe that Halil and men like him were being excluded by Canada in its Syrian refugee resettlement program. I was enraged by this selective justice approach. Being a single man, not having a family, is a stigma in many Muslim societies. Why would a country like Canada want to reinforce that stigma and make people suffer more? And wouldn’t a policy like this, that rests on a belief that single Muslim men are more prone to violence and to being terrorists, turn into a self-fulfilling prophecy?
In a beautiful and very informative history of Arab and Berber immigration to France, Paul A. Silverstein shows in “The context of antisemitism and Islamophobia in France” (2008) how the French state created the very thing it was most afraid of – “transnational Muslim subjects”. In response to their racialization and isolation by the French state, Franco-Maghrebi youth would eventually express their outrage through the banlieu protests. It is no surprise, says Silverstein, as the French state, in its attempt to control Islam in France, persistently racialized and interpolated this generation qua Muslims. Why then wonder that people started to identify themselves as such?

Certainly, there aren’t many single men registered as refugees. But what assumptions are we advancing when we exclude them from consideration entirely? Do we really want to express the view, as a policy principle, that all single Muslim men pose a security risk to Canada?

Since I left Suruç, I have lost contact with Halil and many other people whom I met in the camps. From the bottom of my heart I hope that they are alive and have either returned to rebuild their homes or have found new ones. I was shocked when I read that the Amara Cultural Centre where I spent quite some time was nearly destroyed by a suicide bomber (a man disguised as a woman).

The time I spent in Suruç with refugees was probably one of the most important periods in my life. It hurts so much to know that some of these people would be denied hopes for a new home and a new life because of their gender, religious identity and our beliefs that people with these characteristics are inherently violent.

Dafna Rachok is a graduate student in Anthropology at the University of Alberta, and a contributing Editor to Ukraine Political Critique. Originally from Kyiv, Ukraine, she is a committed feminist interested in studying postcolonial theory and fighting for a social change.