Alberta has not been the most hospitable place for social justice movements such as the lesbian, gay, bisexual, trans(gender) and queer (LGBTQ), feminist, anti-racist, labour, environmental, or immigrant movements or insurgent Indigenous movements. In the case of Alberta’s LGBTQ movements, various Progressive Conservative (PC) governments (1971-2015) used a combination of targeted anti-gay and anti-trans(gender) legislation and policies. At the same time the province’s many PC governments systematically denied the needs of, and mostly refused to engage with, LGBTQ people, communities and movements.

Conservative governments and their allies deployed various strategies of diversion, scapegoating, and erasure. LGBTQ people were brought into public discussion only when attention needed to be diverted from other issues, favour needed to be won from the PC’s socially and religiously conservative base, or LGBTQ activists and the Supreme Court of Canada forced the PC government’s hand. Given this hostile environment, one might assume that robust social justice movements, and specifically a LGBTQ movement, do not exist in Alberta, or if they do exist they have not been able to affect substantive change in the province.

Yet it actually serves the purposes of some of those in formal power to deny the existence and effectiveness of social justice movements. In the Alberta case, the provincial PC government long argued that LGBTQ people were an abnormal minority of citizens and they should not be taken seriously, much less listened to by the government. But I hold that since such social movements have been largely shut out of the formal channels of politics, we need to look outside formal politics to understand how and why Alberta’s LGBTQ movement has developed, grown and changed over the decades.

Drawing on my research and activism in Alberta’s queer and feminist communities, I argue in “‘Severely Queer’ in Western Canada: LGBT2Q Activism in Alberta”, that Alberta’s political climate has actually fostered diverse and conflicting LGBTQ activisms in the province. As such, the movement has been strong and largely independent of government influence, and thus well poised to engage with our current, purportedly more LGBTQ friendly, NDP government. Still, we are left with questions about if and how a movement that historically has been treated so poorly by its provincial government can trust formal politics as it engages with new provincial government realities.

The historical relationship between the PCs and LGBTQ has conditioned the developing relationship with the new NDP government. In the 1970s and 1980s, the PC government was representing the will of the then majority of Albertans as it created and upheld pro-family and homophobic legislation and governance practices. By the mid-1990s, however, Albertans’ ideological and political beliefs began to shift as the secular urban population grew and started to become a formidable challenge to traditional rural social conservative politics. Sensing this shift among the electorate, PC premier Ralph Klein attempted to appease his religious and socially conservative base without losing the support of the ever more moderate urban voters.

To win favour from both camps—the neoconservative rural base and the growing urban and more socially liberal electorate—Klein practiced a politics of inaction with regard to human rights and particularly LGBTQ rights and protections. Specifically, in reaction to the 1998 Supreme Court decision in the Vriend  case, Klein simply refused to add sexual orientation as prohibited grounds of discrimination to the province’s Individual Rights Protection Act (IRPA). In 2009, PC premier Ed Stelmach did add sexual orientation to the act. At the same time, he also introduced parental rights, prohibited free discussion of sexual orientation and sexuality in Alberta classrooms, and defunded “gender reassignment surgery,” thus targeting and marginalizing LGBTQ Albertans.

There have been moments, albeit after much activist protest, where Alberta’s PC governments did support the LGBTQ community. The Alberta government was, for example, the first in the country to establish a plan for HIV/AIDS funding. Yet such moments of government action cannot be used to deny or dismiss the hard, everyday work of those in the trenches of the struggle for justice. Moreover, it must be remembered that such moments of government action come on the terms of the government, which decides if, when, and how to engage marginalized communities.

While largely cut off from accessing the government, its supports, protections and services, Alberta’s LGBTQ people and communities, like most other marginalized communities and social justice movements in the province, have worked outside of the government. They have built communities of care and protection in reaction to violence, disease and death. They have engaged in active and vocal political organizing that have been critical of the government. They have also engaged in advocacy, community education and debates, and have experienced conflicts, exclusions and cooperation within the community. They have created culture, art, festivals, media, businesses, collectives, health services and community centres that represent and serve the unique, diverse and often unheard voices, histories and issues of the community.

In the 2012 election, Alison Redford’s PC’s presented themselves as the moderate, pro-gay choice in opposition to Danielle Smith’s Wildrose Party, which harbored anti-equality policy positions and supported openly racist and homophobic candidates. The Wildrose threatened to dismantle the Alberta Human Rights Commission in the name of unfettered free speech, and promised that referendums would be used to vote on contentious moral issues and, ultimately, to determine whether minority rights should be protected.

Alberta Opposition parties were quick to criticize Smith but Redford’s vow to uphold gay and lesbian rights came only after Wildrose’s homophobia began to surface and lead to protests. Centrist and moderate voters panicked. Some gay activists even encouraged voters to strategically support the PCs in order to ensure that Wildrose did not form the next government. The PCs were, in fact, perceived as a desirable political option for some white, affluent gay Albertans. In contrast, less affluent and privileged Albertans who had long suffered under PC rule based on their gender, race, class, ability, and sexuality found neither support nor representation in a party that mostly ignored human rights, and prioritized individual freedoms, corporate rights, and the deterioration of the social welfare system.

Once in power Redford quietly resumed funding “gender reassignment surgery.” She also took the opportunity to speak at the 2012 Pride festival in Edmonton but she did not utter the words “gay,” “lesbian,” “bisexual,” “transgender,” or “queer”. Instead, she used relatively benign and safe words like “diversity,” “equality,” and “freedom.” This subject-less and universalistic language rendered invisible the reality that Alberta’s LGBTQ communities have diverse lived experiences, needs, as well as political views.

Following Redford’s unexpected early departure, Premier Jim Prentice proved more socially conservative and began to backtrack on modest gains. The Prentice PC’s delayed and reluctant support for Gay Straight Alliances (GSAs) in Alberta schools left many LGBTQ people feeling as though attaining any change, no matter how modest, would require a fight with the PC government. 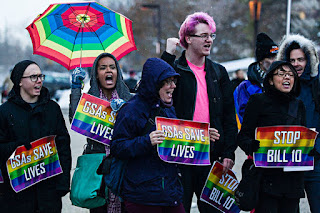 Alberta’s reputation as the most socially conservative and homophobic province in Canada was thrown into question with the historic election of Rachel Notley’s New Democratic Party (NDP) in the spring of 2015. While this change in government may be seen as a moment of positive change for Alberta’s marginalized communities, I also see this moment as unsettling for the LGBTQ community, and potentially for other social justice communities in the province. Accordingly, my current and future activism, engaged scholarship and research seeks to understand and analyze this changing relationship between the Alberta government, and LGBTQ communities and movement, asking questions such as: What is lost when we have to speak the language of the government regardless of the party in power? Whose voices are being heard and whose voices are already being shut out?

There is hope in the current political environment that attention can be paid to deeper social inequalities affecting the LGBTQ community, as opposed to expending already limited energy on issues that were manufactured by previous governments to scapegoat marginalized communities. LGBTQ Albertans’ lives are differently affected by poverty; systemic and everyday violence; lack of LGBTQ competence in physical and mental health services; inadequate legal and social services for LGBTQ refugees and immigrants; and homophobic, transmisogynic, and racist policing, justice, and prison systems. It remains to be seen what is the NDP government’s understanding of, and strategy for, dealing with such issues.

NDP MLA Cortes-Vargas’ candid speech in the legislature about the complexities and challenges of gender regulation is a far cry from the previous PC government’s fear of appearing too sympathetic to LGBTQ Albertans, even while taking the opportunity to speak at Pride festivals as Redford did.

Still, I wonder if the NDP government was prepared for the ugly backlash (and one terrible rap video) that has been hurled at the trans(gender) community by voters who were used to having their reactionary beliefs reflected in, and represented by, their provincial government. Alberta’s trans(gender) community has been strong in its stance against the anti-trans and transmisogynic discourse that has characterized some Albertans’ responses to the NDP government’s Guidelines for Best Practices: Creating Learning Environments that Respect Diverse Sexual Orientations, Gender Identities and Gender Expressions. While the NDP government has withstood criticism for supporting the trans(gender) community, the aftermath of harassment and violence has been most deeply felt by those who were seeking a remedy to oppression in the first place.

Alberta’s LGBTQ community appears to be relatively well-positioned in relation to the NDP government of Notley. Yet, given the reversals, sacrifices and risks that come with government engagement, it is important to think about how we can continue our remarkable history of fostering an LGBTQ social justice movement from within our community and in alliance with other social justice movements in the province. 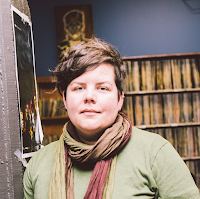 Dr. Alexa DeGagne is an Assistant Professor in Women’s and Gender Studies at Athabasca University, the 2015/2016 Visiting Scholar in Sexuality Studies at York University, and Producer & Host of GayWire News Radio on CJSR 88.5FM. She completed her PhD at the University of Alberta. Dr. Gagne’s research and teaching are focused on gender-based and sexuality-based social justice movements and activisms in Canada and the United States.