Fear and Loathing in Anatolia


I never liked Recep Tayyip Erdogan, the current President of my country. Yet, for a long time, I was ready to give him and his Justice and Development Party (AKP) the benefit of the doubt. They seemed to have deserved it then, as the Army flexed its muscles for yet another bout of interventionism and the secular opposition remain obsessed about whether a head-scarfed first lady would taint Ataturk’s house that served as the Presidential residence. 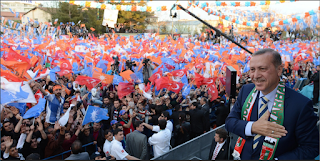 Personally, I lost patience with Mr Erdogan upon hearing him during the budget talks in the parliament in 2010. He has a tendency to talk about government officials in possessive terms: “my mayor,” “my governor,” “my police” etc. I had optimistically assumed that such use was to express his sense of duty as the Prime Minister. Then, he refers to the mayor of Izmir –an opposition stronghold- by turning to the opposition’s seats and saying “your mayor.” It quickly became clear that Erdogan didn’t consider himself to be a servant of those citizens who don’t vote for him. He didn’t even consider us to be part of the nation. He kept referring to “those people.” “Those people” wanted unhindered internet because they wanted watch porn, “those people” opposed alcohol sale restrictions to get drunk all night, “those people” took to Gezi Park not to protect a lonely green space in a concrete megapolis but to stage a coup against the government.
It is such discourse that Erdogan has used so viciously that has led to the polarization and division that is prevalent in Turkey today. Erdogan has now spent years demonizing “those people” to his constituents. And he has built an immense propaganda machine to entrench his vision to the country. It is an open secret in Turkey that contracts are handed out to the party’s own Islamist elite and that getting them frequently entails the establishment of pro-government newspapers or broadcasters to amplify those of state-owned media. Their collective messaging is so heavily controlled that at times 6 or 7 newspapers will contain exactly the same headline. Meanwhile, opposition news sources face trials, imprisonment, audits or bans. Since June 7 elections, 40 journalist detained while working, an AKP MP led a lynch mob to the headquarters of Hurriyet news daily and the paper’s columnist Ahmet Hakan was beaten up by thugs after exchanging words with a pro-government columnist. Turkey accounts for 72% of governmental censor requests that Twitter receives, reflecting an attempt to choke independent reporting in social media.

Such stark divide of media and news sources have the effect of deepening the polarization that Erdogan feeds from. There are very few platforms that feature both opposition and pro-government voices on equal footing. So you have a situation in which consumers of the pro-government media are essentially being subjected to government PR on a daily basis. This allows Erdogan and AKP brass get away with outrageous lies designed to manipulate public sentiment, such as claiming arch-enemies PKK and ISIS collaborated to undertake the October bombings of a Kurdish rally in Ankara, or that Germany orchestrated Gezi protests to prevent Istanbul’s new airport becoming Europe’s new hub over Frankfurt. Pro-government media furthers Erdogan’s demonization of “those people”, who implausibly work with German intelligence, George Soros, ISIS and PKK all at the same time. It is small wonder then that the social connections between the supporters and the opponents of the government are severely broken, to the point that a minute’s silence at a soccer game for Ankara bombing victims was too much to ask. Turkey is now a society in disarray, defined by mutual hatred and suspicion.
Since the June 7 elections, Erdogan’s wrath has been focused on the Kurdish movement led by People’s Democracy Party (HDP), whose unexpected success thwarted an AKP victory. Erdogan was shocked at the perceived disobedience and ungratefulness of the Kurdish movement. His government had been relatively kinder to Kurds and a peace process had been on the way. So how dare they oppose him and his desire to establish an executive presidency? Erdogan’s fury led to the collapse of the peace process, proving once and for all that the President’s massive ego and intolerance to any form of opposition took priority over the well-being of the country. An army major, who lost his brother in the renewed violence with PKK, put it best: “How come those who were talking about peace yesterday are chanting for war today?”
Unfortunately, Erdogan’s plan to ponder to Turkish nationalism and stoking the fears of a new Kurdish insurgency has worked. According to November 1 election results, AKP regained the Turkish nationalist and Kurdish conservative vote it had lost, and is set for one party rule again. Politics of fear won big in Turkey.
Erdogan’s rule has involved fierce majoritarianism, weakening of an independent judiciary and creeping authoritarianism. However, I think the worst of all has been the massive propaganda machine he has built. Millions of people take AKP PR as news, never even being presented with the opposition’s views or evidence. They buy implausible claims like “PKK bombed the Kurdish rally in Ankara.” They do not know or simply ignore the fact that an opposition paper had identified the ISIS cell that conducted the bombings back in July. They do not question why their government was unable or unwilling to stop ISIS members to operate within its soil for months. And they are slowly but surely building up a hatred for “those people,” the opponents of the government who are behind all that is evil. The echo chamber that Erdogan and AKP have built has become a behemoth that can get out of control any minute.
Under the current conditions, the short term will be a tough test in Turkey. However, I remain optimistic about the long term. The new generation of the country, who are increasingly better educated and more connected to the world, will eventually find a way to free themselves of the shackles of dogma and dirty propaganda. The trick will be to limit the damage until then.

Emrah Keskin is a PhD student in the Department of Political Science. He holds an MA from New York University and a BA from Sabanci University in Istanbul. He previously worked as a journalist in Turkey with Radikal and Haberturk. His current research focuses on the impact of mental health trauma on post-conflict reconciliation.  E-mail: keskin@ualberta.ca Twitter: @k13e